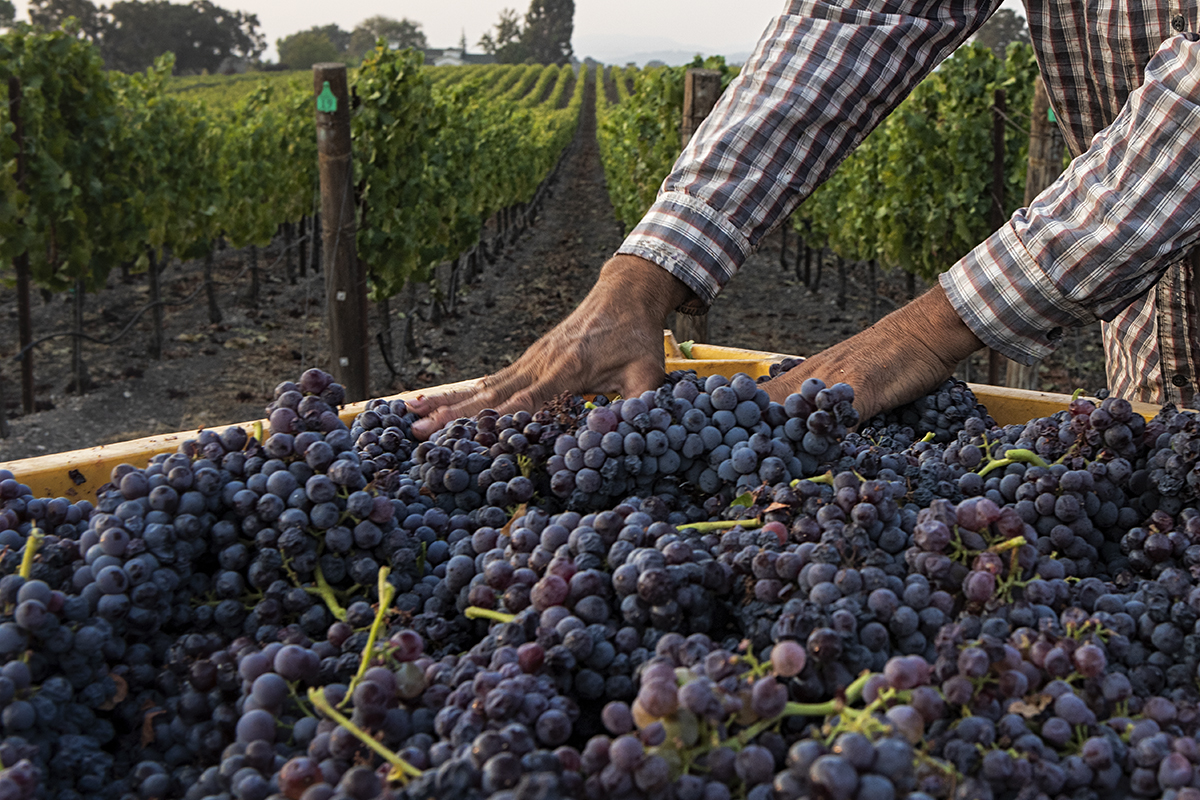 Growing up in the Paso Robles wine region amongst the vineyards with my family was an amazing experience. I was fortunate to be able to explore and learn the Paso wine regions, from the valleys, to the oak studded hills. I have always loved Cabernet Sauvignons, but I always felt like they were never balanced, and the tannins were not smooth or easy to drink.  Drinking an entire glass would taste balanced only if it were paired with food.

I set out on a journey to create the standard for luxury Paso Cabernet Sauvignon.  A rich Cabernet, driven by ripe fruit, full bodied with a long finish, and balanced acidity. The first steps were to find the right vineyards within the Paso Robles wine region, family owned, and sustainably farmed. I have always been an intense farmer growing up in my family vineyards and I have studied the soils throughout the Paso region. I have learned which soils can produce dark wines with fresh aromas of cherry, blackberry and currants.

Certain soils not only produce distinct fruit flavors, but flavors of spice, and hints of pepper resonate from these terroirs. The highest concentration of these soils tends to be on the eastern side of Paso Robles and the Cabernet variety tends to like well drained soils. We searched for the most intense structured Paso cabs from particular family vineyards, and after many tastings were conducted, we began the journey of making the standard for luxury Paso Cabernet.

Why Tannins Are Important in Creating the Best Cabernet Sauvignon Wine

Once our vineyards were secured, the process is started: how to get our Cabernet Sauvignon to have soft, smooth, supple tannins that are balanced and structured. The process of understanding tannins has been my life’s work and it is a fascinating one at that. When tannins are managed correctly, they can supply intensity on the palate from start to finish. Because our grapes are farmed in a certain capacity the yield for tannins is high. Starting with high tannins is crucial, tannins cannot come from just the oak in a barrel. Through our selection of yeasts along with fermentation techniques the high tannins become soft, rich and balanced.

Oak plays a major role in developing intense rich flavors on the palette. Our oak barrels are sourced from all over the world. Myself and our team have developed an aging process of the staves, which differs from other producers.

The oak staves are air dried for much longer before the barrels are put together and toasted.  The production facility follows a unique toasting protocol that helps soften the tannins in the wood residing richer oak flavors that are well balanced.

The Austin Hope Cabernet Sauvignon lives in new French oak barrels to intensify the already rich, ripe fruit flavors and aromas of the wine. Quality oak barrels add up in cost, as do the vineyard selections and farming methods practiced; in the end its money well spent.

What is the Best Inexpensive Cabernet Wine?

People are always asking what the best inexpensive Cabernet and the truth is they can be hard to find. I have spent decades trying to perfect our Liberty School Cabernet for just this reason, a wine of true varietal character with great value.

A good inexpensive cabernet should smell like cabernet, with currants, spice aromas, and cherry flavors on the palate. Just because it is inexpensive the wine should not lack balanced acidity and soft tannins.

While the best cabernet sauvignon wines are typically going to be more expensive, there are still some good inexpensive cabernet’s available out there, you just have to know where to look.

Where Does the Best Cabernet Sauvignon Come From?

I believe the best cabernet sauvignon comes from Paso Robles because of its proximity to the ocean, which provides the best soils for growing dark, rich balanced cabs. Paso Robles also has perfect weather for cabernets, because of the extreme diurnal temperature swings. This means our daytime temperature is in the 90’s and the nights cool down to 50 degrees. These temperature swings are vital in making great cabs; it allows the plants to shut down at night resulting in great balanced wines with delicious acidity.

What Are the Best Years for Cabernet Wines?

Due to our consistent summer weather in California the quality for California cabernets does not have a big variation. The fall season is typically rain free which allows the cabernet vineyards to get ripe.

In other parts of the world such as Bordeaux, France the weather is inconsistent and hard to predict unlike the weather in Paso Robles and other parts of California. Bordeaux frequently has rain in the early fall which does not allow the cabernets and cabernet francs to fully ripen. Without time to fully ripen the wines can develop on the greener side and taste harsh. Time on the vine results in smooth bodied balanced wines.

I love great Cabernets because they can pair with many types of food. Just as Cabernet is the king of grapes, steak is the king of proteins, which makes steak a perfect pairing with a good glass of cabernet sauvignon. Pour a glass of a full-bodied cabernet with nice oak aromas and rich blackberry flavors savored with a steak, one cannot go wrong. A cabernet which consists of soft, supple, and rich flavor will also pair nicely with charred salmon over an oak fire. A great Cabernet can accompany an array of foods.

What Makes a Cabernet “The Best”?

There are a lot of cabernet sauvignon wines throughout the world these days, and many of the claim to be the best, but what makes a cabernet wine truly the best?

At Hope Family Wines, we have been cultivating and studying wine, specifically cabernet, for years in order to find the best techniques for developing a cabernet sauvignon that is truly a step above the rest.

Red wine is the most popular wine consumed in the United States with Cabernet Sauvignon and Merlot ranking at the top of the list. And while we always strive to have the best Cabernet Sauvignon available, it’s important to know just what makes a cabernet a step above the competition.

As mentioned above, the entire wine making process needs to be taken into consideration when producing a wine that deserves to be dubbed one of the best. From the land that the grapes are cultivated into the barrels that hold the wine as it ages. If just one of these steps in the process is inferior, it’s going to come through when you take that first sip.

If you’re looking for the best cabernet wine be sure to take the growing region into account. California winemakers are constantly pushing the limits of what the region can produce. Their methods continue to evolve and develop as they experiment in an attempt to create some of the best wine in the world.

While you may have that friend that claims that the best wine only comes from Italy, France, or Spain, you don’t want to sleep on California wines.

At Hope Family Wines we pride ourselves in our cabernet sauvignon wines. We genuinely believe that the Austin Hope Cabernet Sauvignon is amongst some of the best cabernet wines in the world, and critics agree.

It has been ranked in the top 10 cabernet wines by wine reviewers and top wine publications such as Wine Enthusiast. In fact, Wine Enthusiast listed our Austin Hope 2017 Cabernet Sauvignon as their #10 favorite wine in the entire world. Which was the first time a wine from the Paso Robles region has made the top 10.

So the next time you’re looking for the best cabernet sauvignon wine, skip over those imported wines and try something different. Paso Robles wine country has been producing some of the most amazing wines to come out of California, but often gets overlooked because of the popularity of Napa Valley.

Hope Family Wines has called Paso Robles home since 1978 when we first started out as a vineyard growing grapes and apples. It wasn’t until the mid-1990’s that we shifted the business to winemaking to create the best wines we could.

Over 40 years later and we are fortunate enough to be able to say that our wine is now some of the best in the world. We will continue to push the boundaries of traditional winemaking as we strive to create the best flavored wines in the world.